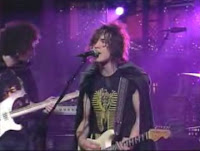 “Time To Pretend” by MGMT

You don’t show up on Letterman wearing druid capes (or Gryffindor robes, whichever) and expect to survive without being confident that you’re kicking out a monster epic tune that’s going to have Apple and Verizon advertising execs waiting out in the hall afterward with blow and hookers to try to snare it for their next Gen Z “culture” TV commercial.

Paul Schaffer rarely books wild cards on the show. Usually if it’s not Bonnie Raitt or the ghost of Warren Zevon you can be pretty sure that the band featured is not going to be that far away from the curb. So when these tweens show up looking like ironic-shirt-wearing-goth-emo smart-asses you could almost hear a nation of 40+’ers give a collective sigh, roll their eyes and look for the remote.

Luckily, mine was under the cat.

Worthy of your iPod.
Download it for free on their MySpace or on iStore.

I found the unused vintage KISS logo iron on transfer on ebay a year ago. Same one I had in 1975. Rainbow glitter. I found a black tee and washed it a few times with bleach to get it to the right shade of vintage off-black. Then I tried my best at simulating the mall iron-on transfer kiosk heat-press by putting the iron on super hot, laying the shirt on the floor and practically standing on top of it to apply the logo to the shirt. Did this a while ago and numerous washings have even started to lift up the corner of the vinyl transfer giving it the true retro look.

I wear it when I’m feeling particularly ratty, or particularly stylish. With jeans and a jacket – it’s da bomb.

I was wearing it one day when I was having lunch with my friend that owns a guitar store. As we were coming back to his store from the parking lot, I see a kid coming out of the music store with his Mom and dad. We were walking toward each other and still about 20 feet away. The kid looked about 13. He had this crazy head of permy looking hair, like that dude from The Strokes or those early photos of Dylan where he looks young, geeky,  vibrant, lucid and capable of cracking a smile.

The kid was with his parents. I don’t know if they were picking him up from lessons or shopping for guitars. He was walking with a bit of that ‘too cool to be seen with my folks’ slump, But not so much that you want to slap him for it. More like he’s just trying to distance himself a bit to be cool, but he’s respectful that they might be buying him his first Epiphone Flying V.

He’s wearing a 3/4 sleeve baseball tee with a more recent KISS design on it. As I see him and his shirt, he sees me and my shirt. His gaze meets mine and without breaking stride, widening his eyes or giving any other sign of acknowledgement – he simply cocks his index finger and thumb (gun fingers) at me and mouths silently “nice shirt.”  As we got closer I returned the gesture with a nod and an audible “right back atcha”  that mystified both his parents and my friend walking with me.

He could have chosen other ways to communicate the brotherhood of the shirt. He could have given the Clinton thumbs-up or the ‘metal-devil-horn’ fingers. He could have pointed it out to his parents “Look, there’s an old guy who likes KISS too Mom!” He could have. But he didn’t. The combination of the Sinatra-esque point along with the silence of the  ‘nice shirt’ comment launched him right over the rico suave barrier.

The kid is cooler at 13 than I ever got to in the height of my powers.
The world could use more of him.
Adolescent white teen suburban rockers who dig KISS and know the difference between seeming like you’re not with your parents and just being a prick.